The Evolution of Green Vibrance

Which came first, the chicken or the egg? The evolution of Green Vibrance can be more easily explained. First came humans, then came Green Vibrance. Or rather, humans evolved, and later Green Vibrance evolved to feed the ancient chemistry that runs us.

Green Vibrance was the first green superfood, introduced in 1992. It contained 34 ingredients (pictured below). Many competing green foods have appeared since then, but none has ever matched Green Vibrance. They cannot keep up with our continuous evolution. 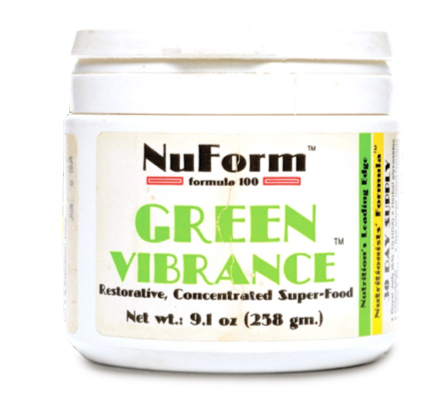 No Vibrant Health formula is “cast in stone.” The fields of nutritional science and biochemistry continually expand as discoveries mount. New and improved raw materials regularly appear. The only way a dietary supplement can remain prescient and up-to-date is to follow the latest findings of science and incorporate the best raw materials. Sensibly, Green Vibrance continues to improve based on evolving knowledge.

The formula today contains more than 70 ingredients. The number has grown over time as new raw materials appeared that fit the core purpose of Green Vibrance: to feed and nurture our ancient biochemistry in this modern world.

Parts of human biochemistry are more than 200 million years old. Most of your genes were set in their ways about 3 million years ago, with the last significant change to the human genome occurring 40,000 years ago. Inside you are a caveman or a cavewoman that adapted to a very different food supply than the one we enjoy today. Indeed, many of our current health problems arise from the fact that our ancient, Paleolithic biochemistry still expects to receive a vast array of nutrients from each calorie eaten.

Foods consumed by our Paleolithic ancestors provided maximum nutrient density because the soil upon which the plants grew had never been farmed. No nutrient depletion from repetitive farming had occurred. Furthermore, wild animals ate those nutrient-dense plants, concentrating high levels of micronutrients in their tissues.

Our ancestors were also much more physically active than we. They subsisted on a daily intake of about 5 pounds and 3000 to 3500 calories of food. Only Olympians consume that much today. Life places milder physical demands upon the rest of us. Thankfully, it is easy to cut back our calories from fat, protein, and carbohydrate. But as we do, we also dramatically reduce our intake of micronutrients compared to ancient times.

That could pose a problem. Each calorie delivered up by protein, fat, and carbohydrate back in Paleolithic times, brought with it more vitamins, minerals, carotenoids, and other micronutrients than do modern foods. This is important because the minute chemistry of life relies on micronutrients in our food. Can we safely reduce our intake of those micronutrients as we reduce calories mandated by our sedentary lives? Not by very much.

The muscles of your Paleolithic mates tracking a woolly mammoth, lugging along heavy, stone-pointed spears, will burn many calories and use up a lot of micronutrients. But consider vision. It does not involve heavy lifting. Your eyes will use just as many micronutrients as your prowling ancestral hunters if you relax in a chair and watch a Discovery Channel special about mammoths. In many instances, the level of micronutrients required for a body system to function at its optimal level is nearly identical to that required of our Paleolithic ancestors. And yet, modern foods supply fewer micronutrients per calorie. At the same time, we have reduced our calorie intake. The disquieting fact is that most individuals no longer take in amounts of micronutrients sufficient to support optimal biochemistry, which gives optimal health.

The evidence is widespread. Osteoporosis, cardiovascular disease, diabetes, and other so-called “diseases of affluence,” the inflammation that accompanies them, and many autoimmune responses are directly related to an insufficient supply of micronutrients. In many cases, patients suffering from these diseases are obese, implying that they are indeed taking in more calories than required. Yet, that abundance of calories does not provide the micronutrients needed to keep arteries clear, bones strong, and glucose metabolism is functioning properly.

The solution? The Green Vibrance evolution.

Green Vibrance first delivers a vibrant mix of micronutrients. Food sources for these include certified organic spirulina as well as chlorella, and cereal grass juice powders backed up by the vegetables, parsley, zucchini, beet juice, carrot, broccoli, sea vegetables, and spinach. The ingredients were chosen based on their extreme nutrient density. These naturally low-calorie plants deliver maximum micronutrients per calorie.

The plant foods are matched so that any nutritional weakness in one is compensated for by the strength in another. If one plant were selected because it was rich in B-vitamins, for example, but happened to be weak in calcium, then another plant is chosen that is rich in calcium and undoubtedly in some other nutrients too. Careful ingredient-matching with each version update means Green Vibrance evolves to become an ever more precise match to our Paleolithic requirements for micronutrients.

Nutrient density is only part of the equation, however. Consider the modern gastrointestinal tract. Pizza, Twinkies, and other factory-made pseudo-foods have abused our Paleolithic gastrointestinal tracts. So Green Vibrance evolved to rehabilitate our digestion through the administration of 25 billion probiotics from 12 strains. They are supported by prebiotics, digestive tonics, enzymes, and chlorophyll from an abundance of green foods.

Our Paleolithic ancestors each developed a tremendously robust and efficient circulatory system due to their high levels of physical activity. We moderns have gone the other direction. It is incumbent upon Green Vibrance then to do something to help us recover the old, healthful circulatory efficiency.

Green Vibrance has taken advantage of the rapid development of specialized plant extracts. Over time, alterations and additions to the botanical antioxidants selected for their verified capability to improve circulation have occurred.

Simultaneously, the extracts provide anti-aging, antioxidant, and chemoprotection at a level estimated to match antioxidant levels in Paleolithic diets. We are Paleolithic people living in a modern, chemical-impregnated world. We need protection. Many plant polyphenols are both chemo-protective (anti-cancer) and help block cellular damage from environmental toxins.

Other botanicals in Green Vibrance support the detoxifying capabilities of the liver. Why? Because the liver is responsible for ripping apart and throwing away potentially dangerous chemicals. As Green Vibrance evolved past version #1, liver support ingredients took their place in the formula. Their integration helps the Paleolithic liver adapt to modern times.

Transient fear of an attack by a wild animal or band of marauding Palo-nomads has been replaced by persistent stress and anxiety on our highways, in the workplace, and elsewhere. Adaptogens can help. They can blunt the damaging effects of hormonal surges that accompany each new stressful surprise, or that gradually gnaw at your health during prolonged periods of stress.

And Green Vibrance evolved to support a stronger immune system. Our ancient ancestors lived in filth. Regular bathing was not part of the daily regimen. Human bodies were crawling with microbes, forcing the immune system to work at peak levels. Due to our more hygienic lifestyle today, our legion of immune cells has shrunk in number in response to the reduced threat. That leaves us in a precarious position. Green Vibrance supports immunity with a series of ingredients that will help maintain a greater number of immune cells, leaving us in a better state of readiness should some microbe pierce the hygienic vail of cleanliness and medicines that protect us.

Green Vibrance has evolved to protect our un-evolved Paleolithic interior and to keep pace with advancing knowledge. In 1992, for example, probiotics were recognized as necessary for digestion and the synthesis of vitamin K and mineral transporters. They were known to aid immunity, heal the gastrointestinal tract, and produce natural antibiotics that help keep pathogens at bay.

And now we know more. Links between bacteria in the gut and neurotransmitters in the brain have been found. It turns out that the type of bacteria in your gastrointestinal tract can affect your very thought processes, intelligence, and mood. Similar influences have been found on body weight and obesity, on skin health, and bodily inflammation. It is now evident that a greater diversity of bacterial species in the gut correlates directly to better physical and emotional health in addition to better disease resistance.

The first version of Green Vibrance led the industry by combining six strains of probiotics at significant potencies. The formula has evolved to 12 vegan-certified strains today. Each is powerfully endorsed deep scientific literature. Each grows in an all-vegetable medium. By avoiding contact with any animal protein or by-product during production, Green Vibrance has become a vegan formulation in this latest step along its evolutionary path.

Throughout its evolution, Green Vibrance has fed and protected our Paleolithic heritage. It always…

Helps protect against the effects of stress.

Winter is in full swing and if you’re anything like us, you need a…

Got the Winter Blues? 8 Ways to Boost Your Energy and Mood!

The weather outside is frightful; and quite frankly the sub-freezing temps and shorter, darker…

Get In Touch With Us