When I mention tree sap, you’ll naturally think Maple trees – then Maple Syrup – then end-up envisioning a stack of pancakes or light, crispy waffles dripping in Maple Syrup and butter. Okay, stop right there. I feel the calories increasing and weight-gain already. Let’s talk about another tree that’s known for its sap.

The Acacia tree yields a gummy sap, also known as Acacia Gum, that is a water-soluble, non-digestible carbohydrate, and it’s a fantastic supplement. But you must have noticed that I used the word ‘non-digestible.’ Well, that’s only partially true.

Elders of the Nyungar community in Australia speak of eating the fresh gum of Acacia (wattle) as a type of confection or ‘Bush Toffee.’ They describe it as ‘very sweet-tasting,’ although you would no doubt find that it tastes only ‘slightly sweetish’ and bland by comparison to the highly intense and concentrated taste of refined sugar that you’re used to consuming.

But as the second largest genus in the pea family (Fabaceae), Acacia has over 1,000 different species ~ and yes, you read correctly it’s a simple Legume. 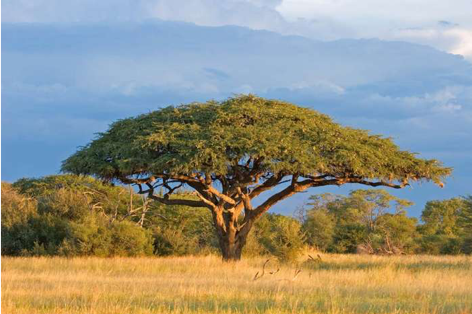 You’ll find that the Acacia native to the Sudan region in Africa, as well as Pakistan and India, yields a very different Acacia Gum, and it’s truly indigestible. If you’ve ever seen photos of savannas in Zimbabwe, for instance, you’ll have seen these majestic evergreen trees, dotting the arid landscape, seemingly springing up from nowhere. The gum is drained from cuts in its bark, and an individual tree will yield 200 to 300 grams. Its usage by humans dates back 4000 years.

This Acacia Senegal (Senegalia Senegal) gum is used in adhesives, cosmetics, pharmaceuticals, confections, and other products. The bark of most Acacias is also rich in tannin, which is used in tanning and dyes, and inks as well. From that long list of uses, you’ve by now guessed that this tree is of great economic importance. 80% of the world’s Acacia Gum is produced in Sudan. The Food and Drug Administration (FDA) has approved Acacia powder and Acacia gum as texturizers, emulsifiers, stabilizers, and thickeners in foods. So, you’ll now find that they are added to many of your prepared foods, such as breakfast cereals, candies, drinks, and baked goods.

It’s also important to you and me because that same harvested Acacia Gum can be dried and crushed into a fine powder, rich in complex polysaccharides (carbohydrates with several sugar molecules bound together), and it does not breakdown in water. This means that once ingested; Acacia is not broken down in your small intestine. Instead, it gets fermented by the resident microorganisms (Probiotics – good bacteria) in your colon. Acacia in powder form can be taken in capsules, tablets, or as a loose powder and help to increase your functional fiber intake. A 1 tablespoon serving of the powder has 6 grams of fiber, which provides between 21 and 29% of the Recommended Dietary Allowance (RDA) of fiber for adult women, and between 16 and 20% of the RDA for men.

Ah yes, ‘Insoluble Fiber.’ Commonly taken to help improve or alleviate constipation, but also, when your diet is high in fiber, it may help reduce your risk of heart disease. A recent report published in Food and Chemical Toxicology showed that when researchers analyzed the available research on Acacia fiber, they found that it appears to reduce cholesterol levels. A noteworthy study published in Kidney & Blood Pressure Research demonstrated that Acacia fiber helped lower blood pressure.

But how about keeping blood sugar levels in check and protecting against Type-2 Diabetes? You’ve probably heard that just including soluble fiber in your diet slows both your digestion and the rate at which you absorb nutrients into your bloodstream. Well, this alone could help regulate your blood sugar levels after you eat. But there’s more specific evidence about the potentially significant effects of Acacia.

Research data has shown that having just 20g of Acacia Gum when consumed with glucose (sugar), resulted in lower blood sugar levels than ingesting glucose by itself. In a study of 21 men who had been diagnosed with Metabolic Syndrome, researchers investigated the metabolic effects of a drink containing Acacia Gum and pectin. After five weeks, they showed improved ‘Fasting Glucose Turnover’ (just a fancy way of noting their rate of glucose uptake and glucose production), in spite of experiencing no changes in their insulin sensitivity or fasting blood sugar levels.

Of course, Acacia assists in the treatment of digestive disorders such as Irritable Bowel Syndrome (IBS). A study published in the World Journal of Gastroenterology showed that yogurt enriched with Acacia fiber and the probiotic Bifidobacterium lactis (B. lactis) helped participants keep IBS symptoms in check. After consuming the enriched yogurt twice daily for eight weeks, participants with both constipation and diarrhea-predominant IBS showed an improvement in IBS symptoms and bowel habit satisfaction compared to those who took a control product.

But, there’s much more to Acacia’s benefits for your digestive tract than keep things moving. Gum acacia has been studied for its impact on improving your digestive health by increasing both the number of beneficial bacteria and the production of Short Chain Fatty Acids (SCFAs) in your gut. How? It’s interesting!

Did you know that bacteria outnumber the human cells in your body by about 10 to 1? Just so we’re clear, you’v e got 3 pounds of living bacteria in your incredible colon right now. The next time you step on the scale, go ahead and deduct 3 pounds from whatever number you see because it’s not yours. To maintain your digestive health and your immune system integrity, the balance of that 3 pounds needs to be about 80% good to 20% bad bacteria. The good, beneficial bacteria is called ‘Probiotics.’ You can increase their number by eating foods like Organic Yogurt, Organic Kefir, Organic Cottage Cheese, Organic Cheddar Cheese, Sauerkraut, Kombucha, Pickled Vegetables, Kimchi, Miso, and Tempeh.

Acacia acts as an essential prebiotic. Prebiotic fiber contributes to your colon environment by keeping it optimal and nourishing the growth of your good bacteria (Probiotics), and…it also helps you suppress the bad bacteria.

In addition to increasing the number of your friendly, beneficial bacteria, when Acacia Gum is broken down by the bacteria in your colon, you get 3 Short Chain Fatty Acids (SCFAs), namely: Acetate, Propionate, and Butyrate. Your body can and will use these for energy, BUT unlike a simple sugar, you don’t need insulin to burn these off (by the way, it won’t affect ketosis either). Butyrate helps your body as a primary energy source for your intestinal lining (epithelium), Propionate also helps those guys out and then goes to your liver for processing. Some excellent food sources for Prebiotics include Onions, Garlic, Leeks, Soybeans, Chicory Root, Honey, Bananas, and Sunchokes (Jerusalem Artichokes).

But what I’m guessing will pique your interest is the use of Acacia for weight-loss and weight-management. A study published in the Nutrition Journal, had healthy women take either 30 grams of Acacia Gum or a placebo daily. At the end of the 6-week study, those ladies who had taken the Acacia Gum had a significant (0.32 point) reduction in their Body Mass Index (BMI). There was also a reduction of over 2.2% of their body fat. Researchers concluded that Acacia Gum had the potential to be used to treat obesity.

Acacia Gum shines brightly, too, in its ability to reduce your hunger pangs. Both a double-blind study published in the Journal’ Appetite‘ and another published by the Annals of Nutrition and Metabolism found that Acacia Gum decreased caloric intake 3 hours after consumption, and significantly increased the participant’s feelings of satiety (how full & satisfied you feel). The latter study followed ten overweight subjects who consumed a mixture of dietary fibers (including 5 or 10 grams of Gum Acacia) for four weeks. Researchers concluded here, too, that the results were significant enough to demonstrate that Acacia Gum could have an essential role in body weight management. When taken all together, the evidence is mounting towards Acacia being a potentially important supplement for those wanting to lose weight without feeling hungry.

Still, further research is needed to find out whether Acacia can help treat various conditions, but getting enough soluble fiber in your diet has been found to support health and protect against both heart disease and Type-2 Diabetes.

Consider this carefully when consuming any fiber-rich supplement, you should increase your intake very gradually, and be sure to drink ample fluids to protect against side effects commonly associated with high doses of fiber. Otherwise, you may experience symptoms like gas, bloating, constipation, and cramps.

Besides the Acacia, you can find soluble fiber in foods like Oatmeal, Nuts, Apples, Barley, Beans, Flaxseed, Carob, and Blueberries.

Finally, as with any dietary complement – if you’re considering using Acacia, talk to your healthcare provider before making any changes in your supplement regimen.

DISCLAIMER: This information is not intended as a substitute for advice provided by a competent health care professional. You should not use this information in diagnosing or treating a health problem. No claim or opinion in this blog is intended to be, nor should be construed to be, medical advice. If you are now taking any drugs, prescribed or not, or have a medical condition, please consult a competent physician who is aware of herb/drug interactions before taking any herbal supplements. The information presented herein has not been evaluated by the FDA or the Department of Health and is not intended to diagnose, prevent, cure, mitigate or treat any disease or illness.

The Evolution of Green Vibrance

By Mark Timon Which came first, the chicken or the egg? The evolution of Green…

Get In Touch With Us